This video, also from Pepper and Pine, is of a home-educating creative form drawing lesson based on Creative Form Drawing with children aged 6-10: Workbook One by Angela Lord. It’s barely edited, and really rather wonderful. Many thanks to Pepper and Pine for sharing this in-depth video.

More about Pepper and Pine: https://www.pepperandpine.com/

A new review of Form Drawing and Colouring, from the The Anthroposophical Society in Great Britain Newsletter Newsletter, volume 94, March 2017. This one got lost in a pile of magazines in our office for a little while, but it was wonderful to find it! Many thanks to Margaret Jonas for the review.

This is a companion volume to the colourful series of form drawing books intended more for children. Here we find patterns inspired by Celtic, Moorish, Native American and Buddhist designs. They are very simply presented with a few dots to start off with and examples of how to develop the forms are then given. One needs only coloured pencils and a ruler to proceed. Colouring books for adults have become very popular and are sold in order to relieve stress so it is good to see on that is developed from the creative form drawing taught in Waldorf schools. A short text encourages one to get started and informs the reader of the benefits to be gained and the thick paper makes it possible to draw in the book itself. The layout and colours are very pleasing and both adults and children should have little difficulty in working through the designs. It is altogether a very clear and pleasing book. 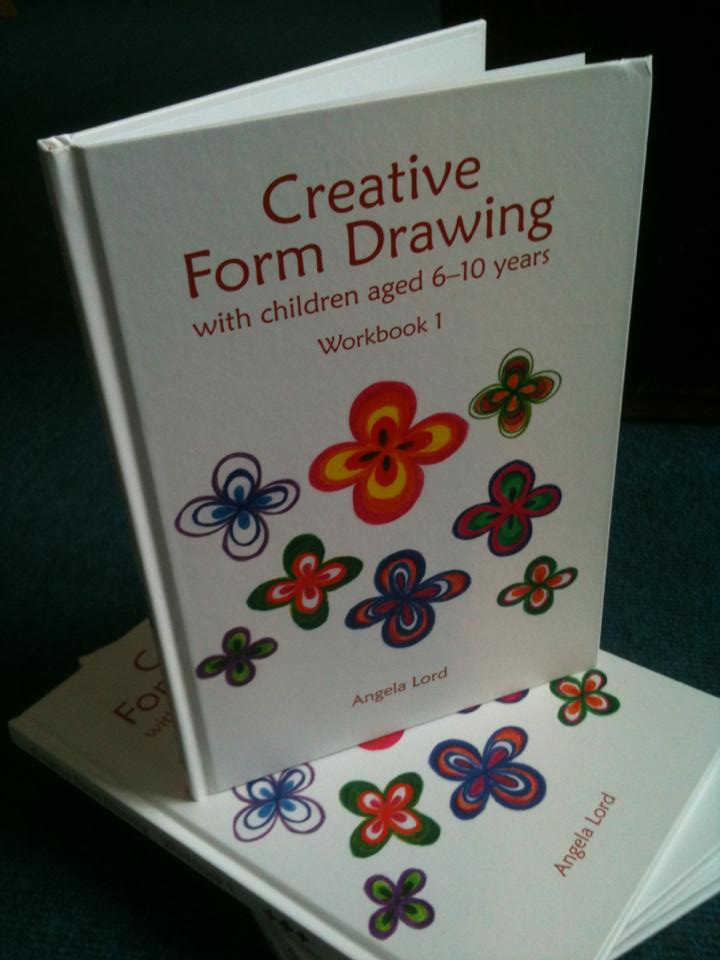 This brilliant review of Creative Form Drawing with Children: Workbook One comes from one of our own authors, Margaret Bloom! We weren’t expecting it, so it’s a wonderful surprise. Thank you Margaret :)

After school, while I prepare something for my younger son to eat, he usually rummages for a book to read or some art supplies.  Lately his favorite activity involves crayons and the book Creative Form Drawing (Workbook 1) by Angela Lord.   In fact, he likes this book so much, it has taken up permanent residence on the kitchen table.

The book is broken down into lessons by age, with a gorgeous array of colorful drawings to illustrate the forms and principles.  Each lesson is methodically outlined by age/grade level and very clear; however, my son and I prefer to leaf through the book, choose a page of designs which appeal to us at that moment, and use the illustrations as an inspirational launching points for our own kaleidoscope experiments.

While coloring books are a popular trend, the designs in this book take the user beyond mere coloring projects; with this book, my son & I feel encouraged to try our own original variations of each form.

Click on this link to read the rest of the review.

Other books by Angela Lord

This wonderful review is from the latest issue of Juno Magazine. It will be available from Thursday the 1st of December, and we can tell you now that it’s well worth buying; packed full of fantastic articles, craft activities (we particularly liked the ‘frost discovery’ ones) and some lovely seasonal eating ideas. Thanks to Saffia Farr for taking the time to review it, and for making the review look so beautiful in the magazine!

I have really enjoyed trying out this book, and I found it very therapeutic to sharpen some pencil crayons and learn how to build up patterns. At first the childish and perfectionist part of me was frustrated by my “mistakes” and wanted to rip out the page and start afresh. But then I experimented with merging colours and lines and made my “mistakes” look beautiful.

The book features four-fold patterns of increasing challenge and it’s very satisfying to build up the pattern section by section. There is plenty of space to practise the lines and shapes and also blank areas on the pages for freestyle doodling. The designs are inspired by Celtic, Moorish, Native American and Buddhist patterns as well as natural patterns such as leaves. I don’t yet have the confidence to try the most complex ones, but I am pleased to see some are part drawn so that I can embellish those elements or simply colour the shapes. I will certainly enjoy continuing to experiment with this book.

This review was written for the SWSF newsletter by Kevin Avison, and we’d like to thank him for letting us reproduce it here.

Once a diversion for children with few claims to be serious or educational, colouring-in has become respectable enough to be taken up by adults. Often this is explained as a form of “mindfulness practice”. Indeed, one such book is called The Mindfulness Colouring Book, and, for example, Hephzibah Kaplan, director at the London Art Therapy Centre, is quoted in the Independent newspaper saying: [colouring-in]… “requires a relaxed focus where the outline is containing and the mark-making repetitive and smooth…a bit like repeating a mantra where repetition is a means to relaxation, colouring-in is also a type of mediation….Meditation, whether secular or otherwise, has known benefits to mind, body and spirit. When focusing deeply on a simple yet safe task, other anxieties become less present, less pervasive.”

So, colouring-in has become a “thing”; newspapers, such as the Independent, publish lists of best buys, while Amazon’s website includes seventy-five pages of books and colouring materials. Angela Lord’s book is, however, a little different, offering a cleverly though-through sequence of patterns to help users practice and be enabled to create a variety of fourfold patterns, both guided and individually-designed. Someone working with this book will thus experience a “breathing” between concentrated linear form drawing and a relaxed colouring-in process. Needless to say, Angela Lord provides examples for the latter as well as step-by-step help to produce the forms. Someone who did not attend a Waldorf school can use this book with confidence and produce beautiful results. Those involved in the education will also enjoy these books and teachers will certainly find them helpful alongside the same author’s Creative Form Drawing for class teaching. A further book for adults is promised, this time with fivefold patterns.

The book is nicely produced, although the binding can be restrictive and the user might be advised to break the spine – which is a pity to have to do – so that the book can be opened flat (a spiral-bound format, or some other system of the sort, would work better). It is a little pricey too compared to other books of this general type. On the other hand, the unique qualities of this book make it particularly attractive and potentially creative. The claim that working with it will harmonise “body & soul” may depend as much on the user as the evidently deeply-considered patterns themselves. However, I rather imagine that the sound of colouring might well become a feature of some school meetings: perhaps for the better!